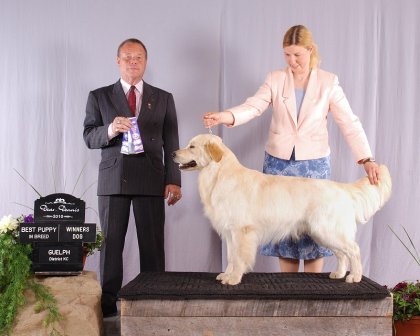 Jackson is co-owned with Vivienne Muller of Falcon Lake in Canada, where he resides.  He is a member of the Derby Traditions litter whelped during the Run for the Roses, May 2009, literally!  He is proving himself to be a boy with not only correct conformation and handsome looks, but also a boy who has the brains to back it up. He also has retained the purpose of this wonderful breed. (Jackson’s dam “Polly” is currently also doing field work with new owners Barb Loree) Vivienne is training him in the field and is getting ready to begin his agility training, along with advanced obedience work, with some assistance.He completed his Canadian champiuonship August 2012 finishing with a BOB at the St. Catherine shows. Watch for him!

Jackson,  received a Best in Breed Puppy award along the way to his Canadian championship. He has achieved his CGN (Canadian Good Citizen), RN (Rally Novice), and PCD (Basic Obedience) titles to date.  Jackson has beautiful movement and an exceptional temperament.  He is passing these same qualities along to his offspring, just as his sire and dam passed them to him and his siblings.

Jackson is available to approved bitches with all current clearances both domestic and foreign.  Fresh chilled semen and Natural breedings available. For information or service you can contact either myself or Vivienne (falconlake@porchlight.ca). We will be happy to talk with you. 🙂